Lessons From The New Towns

Lessons From The New Towns

Last night I went along to a talk by Carlton Reid and Graham Grant on urban cycling organised by Recyke y’bike. The focus was mostly on Newcastle, given we were at the city centre café – The Journey. Debate did touch on the experience of the new Towns with cycling, and in particular Stevenage, which Carlton has investigated extensively.
Around the same time that Carlton was looking at Stevenage I was involved with studying active travel in Cramlington, doing some work for Northumberland County Council. Without labouring on the detail the conclusions that I reached were:

Carlton Reid makes a very sound argument that in Stevenage the lack of car restraint and ease of motoring was the prime factor in the failure of it’s cycle network to compete for mode share. I wouldn’t necessarily take issue with this.
It is worth noting that even though the detail of the cycling network is better in Stevenage than Cramlington, the density of the network is even worse. While Cramlington’s network manages a mesh of around 500 metres Stevenage is at around 750 metres or further. Neither come anywhere near the modern standard of a 250 metre grid network that is generally accepted as being required to make utility cycling work. 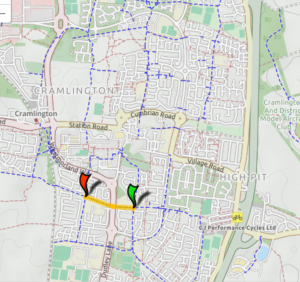 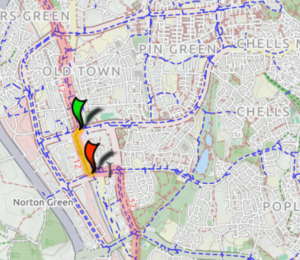 
Working in development it is often exceptionally difficult to get cycling taken seriously enough as a mode of transport that a dense enough network is created. Often bikes are treated as fast pedestrians or slow cars with little thought given to their specific requirements. Drawing the lessons from the New Towns of the 1960’s to 1990’s is essential, but that means looking at the network not just the design of the underpasses.
There’s an argument that if you build a very finely meshed grid of streets and keep them very safe you can reduce the density of the cycle network down to 4-500 metres without causing problems (people just use the normal street network). This may however push up journey times slightly which will matter more in some places than others. Unfortunately for our New Towns they combined low density bike networks with a hostile car grid and impermeable access streets.

The ideal is a dense bike network, some restraint on cars and great streets, the three complement each other and can be the same thing. 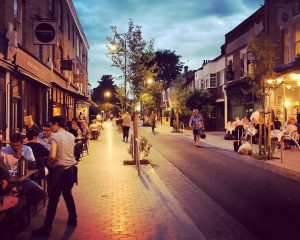