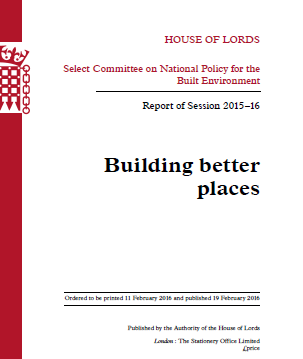 As well as calling for more to be done to increase the quantity of housing being delivered the committee also asserts that more attention to design at the beginning of the process will allow better quality to be achieved.

“The Government should review the National Planning Policy Framework to make sure developers aren’t using financial viability to play fast and loose with design quality and sustainability. If developers submit substandard plans local authorities should be able to ask them to think again”

However delving into the detail of the report there is also a clear message that many of the obstacles to achieving better design lie within the public sector itself.  The report notes that over 80% of the public realm is highway and makes it clear that all is not well.

“We recommend that local authorities including authorities with highways responsibilities should fully adopt Manual for Streets and should adhere to the policies contained within it.”

Colchester Borough Council told the committee that most transport authorities do not adopt or promote Manual for Streets.

“Transportation is arguably the key to promoting more sustainable and resilient built environments, though Highway Authorities are generally car-orientated, detached from local planning authorities and have unquestioned authority”.

On the ground Highway Authorities require streets in new developments to meet adoption standards that haven’t in some cases been updated since the 1980’s.  Where recent standards are published they often owe more to DB32 (1992), the now out of date CIHT “Transport in the Urban Environment” or the Highways Agency’s Design Manual for (Trunk) Roads & Bridges.

The report alludes to difficult negotiations over infrastructure and scheme viability.  There is a finite proportion of Gross Development Value that any housebuilder is prepared to contribute towards transport infrastructure and public realm.  Developers and their transport consultants have learned that attempting to promote street designs which diverge from local authority guidance is time consuming and difficult.

On the ground we see resources which could go towards good public realm and sustainable infrastructure instead manifesting themselves in wide expanses of asphalt.  We continue to see schemes which trumpet their provision of the “7.3 metre wide Local Distributor Road”.  These roads, threading their way to all corners of a development provide traffic capacity far in excess of that likely to be required.

Having accepted the requirement to provide roads of this width within a development, developers then face a Highway Authority preference against too many side streets, direct frontage access and on street parking.  These requirements distort the layout of new housing, create “roads” rather than “streets” and lead to a situation where traffic is funnelled through a hierarchy of roads that become ever more hostile to sustainable movement.  None of this meets the requirements of Manual for Streets.

By the time thought turns to sustainable movement and public realm infrastructure budgets have been exhausted and the debate is on viability with authorities being asked to chose between affordable housing and providing for walking and cycling.  If you are wondering why the new housing estate where you live is full of big roads and sub-standard shared use paths the answer lies not with the housebuilder’s mendacity but in the process itself.

If we want to see garden villages, great streets and sustainable infrastructure that achieves best practice then something has to change.  Adhering to Manual for Streets is the best start we have, the Committee is quite right to call for this.

Local Authorities that want great streets need to make so clear at the outset of the masterplanning process and accept that more of what is currently spent on “black-top” needs to go on “red-top” and public realm.  Developers can create more attractive and valuable developments if they pay more attention to examples of better street design being implemented in the UK and try harder to agree a progressive street hierarchy at the outset of a project.

Architects and Consultants could perhaps work harder to find those highways officers in their project area who look towards the better street designs we see in other North European countries and will advocate for innovative design. 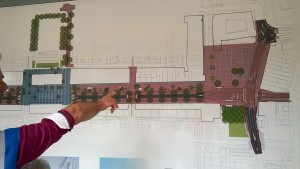