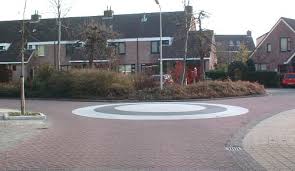 A Punaise junction, loosely translated as a “Pinhead” junction or circle junction is something rare in the UK but very much a standard feature where quiet residential access streets meet in some other European countries.  So how can we build them here cost effectively?

In the UK perhaps the most famous example is Poynton in Cheshire where around 27,000 vehicles a day mingle in what has become popularly known as “Shared Space”.  However the main application of this sort of arrangement, quiet streets, seems curiously absent from most of our housing estates.

A Punaise works by creating something that looks like a roundabout but lacks the formality of highway markings.  The theory is that certainty and formality equals higher speeds, informality and uncertainty equals lower speeds.  Whether this really works in high traffic environments is up for debate, but in the heart of residential neighbourhoods it not only works well but looks pretty good too.

Ironically we seem to be in a situation in the UK where you are more likely to come across a Punaise in a busy heavily trafficked town centre than you are in the context it was originally developed for.

There are some great, albeit rare, examples of residential Punaise in the UK.  Typically they are constructed from concrete blocks and therein lies the problem, they look great but are perceived as expensive both to build and to maintain. 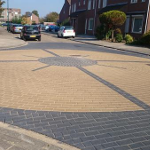 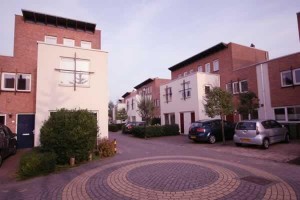 Whereas some local authorities are prepared to take a hit on costs for a town centre site, for residential streets whether for their own schemes or new housing developments cost is king.  Concern over future maintenance spend is at an all time high with UK Highway Authorities who in some cases are busy withdrawing any road adoption standards that allow anything other than Asphalt “Blacktop”.  Coming up with hard wearing designs which look good but use a limited palate of cheap materials is arguably one of the big challenges for Landscape Architects at the moment.

Developments in Newcastle-Upon-Tyne may point towards a solution.  Newcastle City Council Engineers together with Sustrans visited The Netherlands back in 2014 and one of the projects to emerge is installation of a series of Punaise junctions in the inner-urban suburb of Jesmond.

Newcastle are on site at the moment and intend to construct the Punaise on top of raised junction tables (Punaise und Drempel in Dutch).  With cost and maintenance high up the agenda they’ll be building the tables from red chipped asphalt and then creating the circles using either highway paint or an anti-skid surface treatment.  Another Newcastle project which might point to an even harder wearing solution is a shopping area where they’ve created designs on the carriageway using different coloured chippings. 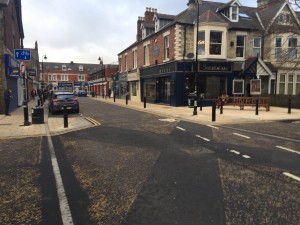 An even cheaper and perhaps temporary solution is creating standalone Punaise using standard highway paint.  This design photographed in The Netherlands isn’t intended to be permanent but when a quick cheap fix is needed then it’s easy to see this working in the UK (they might insist on different coloured paint). 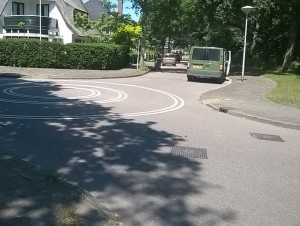 We are a long way away from local Councillors and Engineers being aware of solutions like this when they try and fix issues in their residential areas.  However if we can come up with cost effective designs in new housing schemes then we’ll create the all important local examples that can gradually lift the quality of design in existing neighbourhoods.  If you’re working on access streets and feel tempted to start painting “give-way lines”, think again and look for a low speed solution, which might well be a Punaise.