A Trip to Poynton

A Trip to Poynton

On August 25, 2016, Posted by Tom , In Almere Blog,Uncategorized, With No Comments

Unusually this blog comes to you from a service station on the majestic M6 in the heart of the Lake District, in some ways scenic, in others not. As I sip a tall Starbucks and the car gulps Ecotricity there’s time to get a few thoughts down.  This afternoon I stopped in at the Town Centre of Poynton in Cheshire, which sounds quaintly rural but is actually just up the road from Manchester Airport. Poynton is well known in urban design circles as home to a street re-design project constructed a few years ago as one of the UK’s notorious “Shared Space” projects. 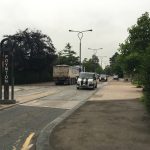 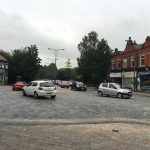 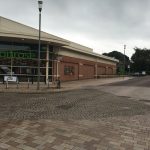 Poynton took design from Ben Hamilton Baillie & Paola Spivach, traffic modelling from Arup, money from various pots including a small sum from Sustrans, plus the might of Cheshire Highways Department to do something different. I worked with Paola on a street redesign in Newcastle back in 2013 so heard a lot about the project, saw a lot of photos but this is the first time my travels have taken me close enough to have a look.  Others have written at length on the history of the scheme and it’s design so I’ll jump straight to the crux of it, does it work and could or should anything have been done differently?

Whether Poynton works or not depends on whether you look at in isolation as the finished product or as a step along the way to a better town centre which will also involve some form of ring road to take at least some of the traffic out.  On its own Poynton Town Centre seems to work pretty well for pedestrians, for those that can see where they are going anyway. Crossing the road is very, very easy, with cars yielding on both congested and uncongested sections. 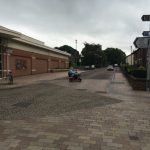 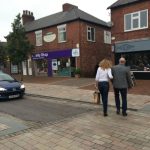 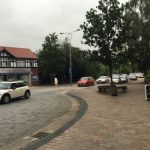 As a car driver, which I was today deliberately, the streets cope with thousands of vehicles at evening peak. Queues are significant, even in August, but the junction at the centre of the scheme does cope. Drivers treat the junction in a number of different ways, I found it psychologically less wearisome just to treat it as a pair of roundabouts. Only one driver seemed to struggle, a young learner driver. 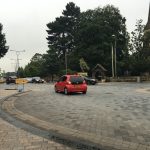 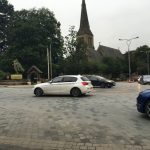 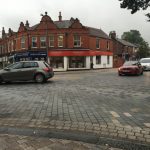 Significant numbers of LGVs move through the junction and the ability to completely overrun the centre of the junction being key to keeping it compact. Interactions with cars in this process are minimal as it’s blindingly obvious to even the most stubborn and entitled British motorist that you need to stop and wait for the process to finish. 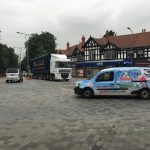 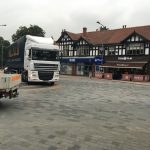 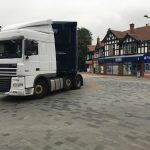 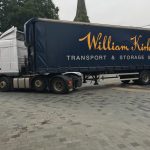 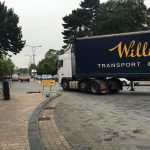 I’d taken a bike with me too, the idea being to try the scheme out in all modes. From a user perspective it’s decidedly a mixed experience. The narrow approach roads are very frustrating as you’re stuck in with queuing traffic, I’ll confess to riding down the median on a couple of occasions. The junction itself leaves you feeling very exposed.  I spoke to a lady out shopping, she’d stopped riding through the junction since the changes, her solution being to get off and push. She simply doesn’t do roundabouts. 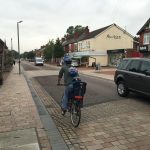 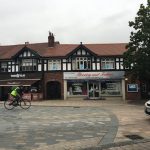 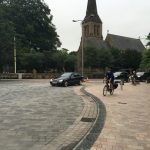 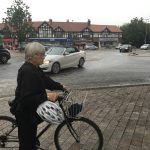 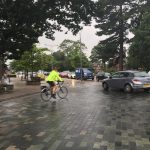 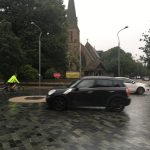 I also chatted at length to local bike mechanic Graeme, who I was in the process of buying a rather rice Batavus Cambridge Dutch bike from. Graeme had a few issues from a technical point of view as a local club rider he struggled with the gaps between the rough granite sets edging Park Lane on thinner tyres. What really surprised me was that he too confessed to choosing not to ride through the junction.  It’s possible that the junction will turn out to be very safe for cycling, in that a lot of the very high risk interactions with traffic, including left turn conflict with LGVs have been designed out. It also may be very safe because people avoid it.

From a completely ruthless short-termist point of view it’s possible to argue that Poynton works for the vast majority of its users, who are either adult able bodied on foot or in a car. However, it’s now generally accepted to be poor policy in the long term to design out cycling if there’s ever to be any attempt to reduce dependence on the car for short trips.  The issues that blind and partially sighted people have raised with the removal of formal crossings are well documented, some can be designed out but in a very high traffic environment it’s difficult avoid concluding that they have a point.

From the perspective of Poynton waiting for its “bypass” however, the scheme looks like a success. As a 5-10-year stop gap it may be the best solution available, which at £3 million sounds pricey but compared to a bypass that’s peanuts.  The Manchester Airport Relief Road is currently under construction just down the road. This will at least start the process of removing some of the huge volume of traffic from Poynton Town Centre. Locals are confident that the Poynton Relief Road (“the other bypass”) which will complete the process is following soon. 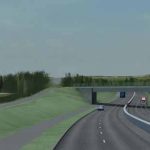 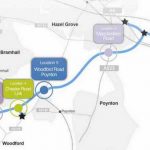 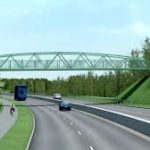 The airport relief road is a £290 million project creating a road far in excess of the scale that might be needed to take traffic out of Poynton.  Building a ring road purely on the basis that it will make a town a healthy liveable nice place can be difficult in the UK. Particularly in the current climate everything from funding packages to development orders are justified under the mantra of “growth”. I hope Poynton finally gets its bypass(s) and that someone remembers to tell the design engineers that the design objectives include minimising severance and delivering a calmer and more tranquil town centre.

The section of the Poynton Scheme that works best and may prove the long term winner is Park Lane and Waitrose junction, traffic does move slowly and if in the future it is reduced to access traffic it will work well. 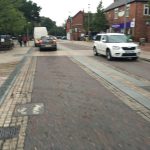 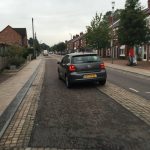 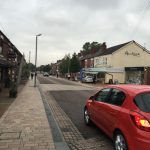 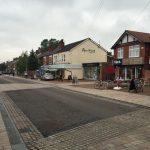 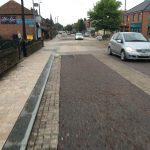 The principal junction in Poynton will hopefully one day not need to take LGVs if they are able to come in via a ring road arrangement. This would leave scope to look at it again and perhaps with lower traffic a simple staggered crossroads might work. At least they’ll be able to reuse the granite which although looking a bit wobbly in places won’t wear out any time soon.
The key lesson to take away perhaps is that if it’s possible to redesign a town centre and take traffic out via a ring road at the same time then that’s by far a better solution. As a stop gap, recognising that doing everything at once is difficult, Poynton deserves credit for trying something new. There is a lot to take from it that can be applied elsewhere, although perhaps it will work better with a few less trucks and cars.